Why we started 15Rock

Our reason for starting the firm 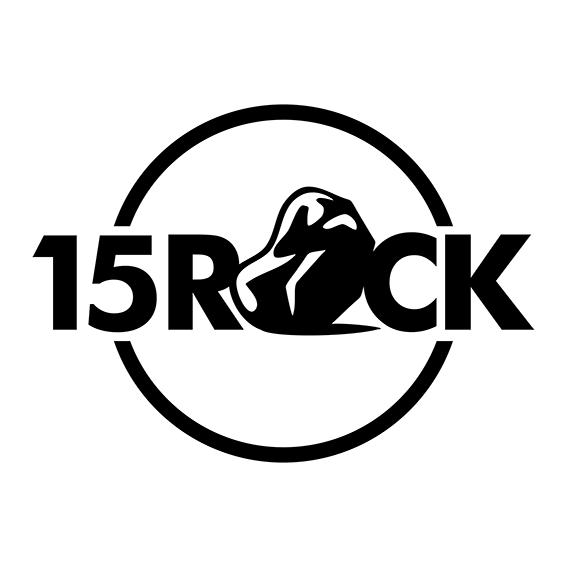 Something feels really wrong with the world today.

50 years ago, we looked at a future of flying cars, 5 hour work weeks and a future where Bif from back to the future was one of the wealthiest people on the planet. We got something wildly different.

There's a mix of anger, hopelessness, and hope. We all know the world is changing quickly, but we are divided on how that change plays out. Is change going to be good or bad? We cannot stop the change, but we can manage it to maximize the positives and mitigate the negative impacts...

But before that, let's start somewhere less complicated.

I think the name gives us insight into the kind of company we're building. In Kyoto, there is a Zen Garden composed of 15 Rocks surrounded by perfectly smooth sand. The rocks are placed, so it is impossible to see all 15 Rocks at the same time. To see all 15 rocks means you have obtained enlightenment.

For us, the idea of this garden is that the whole picture is not possible to see, and maybe you need to see the unseen with something more than your eyes.

As you enter the garden through a side of the temple, you see wooden benches facing the garden. Unless you arrive early and are alone, you will see many people counting the rocks and moving around the wooden benches so they can confirm there is, in fact, 15. Two things are interesting to me every time I visit the garden, how after hundreds of years, people still try to double-check the number of rocks and how people are coming from all over the world to see if they can see what so few have seen - all 15 rocks at once. It reminds me that as humans, we want to see more and find meaning within the world.

When it comes to the problems in the world, I struggled to understand how and why climate change was getting worst. Why were we more advanced than in our history, yet the climate risk wasn't being addressed. I felt I couldn't see the 15th rock.

We at 15Rock aren't professionally spiritually inclined, so we will leave that to others; still, we wanted to help as human nature. But what is the 15th rock that we want to help people see?

With our technology, finance, and analytics skills, we brought it together to address a hard-to-solve problem that we saw people in finance struggle with. Our values.

In our career, we have used financial models that predict prices of currencies, stocks, and bonds at some of the world's largest trading desks, hedge funds, and asset managers. These models are relatively standard, so the game has been to figure out the model output before everyone for many years. Some brilliant people are working on making money from millisecond improvements, but reducing latency wasn't something that interested us.

We wanted to leverage technology and capital to create meaningful change in the communities within the world.

We felt no one was doing this and until recently were being laughed at when we spoke to investors about this. Many investors today do not see social impact as part of their mandate, while others do. We felt the ones who do will not only win but eliminate the ones who do not.

Is our solution perfect? No. But do people really know how their current impact processes are being done? Many of our clients are shocked when they dig into the current state while the big players in the space realize this then invested resources to get an edge.

Early in my career, I worked with senior leadership of very innovative investment firms. I got the honour to become friends with these industry leaders who became my mentors. When they started their firms in the '40s and '50s, the world was very different.

First off, early investors did not make as much money as they do now. That is a recent phenomenon around the 80s. Previously most were making about the same as a school teacher. As school teachers, these investors often saw their work as impacting the community, so they invested in companies on their valuations and the social impact. They would mention they would travel far and wide to see a company firsthand and observe the community it operated in.

The idea was if the company supported the community values. It would not only be connected with the communities it operated in, but the community would be more supportive of them.

A few things in the last few decades have changed this. Investors have many companies they have to process; visiting companies' sites is harder. Why take a week to see one company when you can meet with 8 a day via meetings. Zoom has made its scale even higher. But as a result, a lot is being missed. But if everyone is missing it, then people assume it wasn't bad.

Electronic trading made mistakes easier to correct. If you invested in a company and were wrong, you could get out quickly and try again. You didn't have to think long-term of anything other than the valuation.

Another change is companies have gotten much larger. They need to grow if it's purely based on valuation. As international trade got more accessible, then faraway places got closer and local communities became secondary. Why invest in your community if you could use that capital to fund international expansion?

This resulted in arbitraging the creation of external risks. Hiring workers in developing countries is 80% cheaper can boost valuations and fund further expansion regardless of whether it creates hardships for the local communities. The loyalty shifted from communities and social good to shareholder value.

Taken to its extreme, which is basically have, communities are seen as resources and leveraged for valuation growth. This means a company can pollute a community. If the community does not like it, then the company will take jobs elsewhere. Countries such as China welcomed international firms to shop there, use cheaper labour, and manage their communities by local leaders.

But this has come back to hurt us all.

The cost to the planet

Emissions are growing out of control. People feel helpless. The world is divided and caused the rise of nationalistic politics(creating the US vs them mentality).

I met Vinod Khlosa when he attended a conference in my city, and he mentioned that something must change. Capitalism has left a large group behind, and that group will only get bigger and bigger.

We thought about this idea a lot. We didn't believe capitalism was dead, but we felt something would be needed for its next stage.

We choose the problem above. We felt that companies could externalize pollution without any cost(we support a carbon tax as a solution). But there are many other instances. We felt that when companies did not reflect the values of the communities, there were problems and the unrest in the world was due to people living in a world that they felt didn't reflect their values.

Which values are the correct values?

We do not know and will never claim to know. We all have our ideal weights, we felt that knowing our weight was the first step to our weight loss or gain journey. We won't say if anyone is at a good weight or not; that's subjective. We provide the tools to start the conversation.

We believe climate change is a distant risk to all species on the planet but also causing massive suffering today. We see this in the form of food shortages, unpredictable weather, etc. The challenge is they aren't happening to the areas where people in power are directly affected. Still, as most major cities are built near oceans, the impact will be visible.

It's happening right now in many areas of the world before it gets to the level where significant segments of populations will have to be relocated. This is creating geopolitical tensions that can spiral out of control.

When resources are limited and the political will to get involved in humanitarian efforts far away is at a low, this is a very difficult time.

What can we do?

The pressure has been put on consumers(bring a bag to get groceries, bring your own mug to get coffee, etc.). Still, a large part of emissions is generated by businesses. The solution should be to leverage the smart people at these firms. By rethinking processes to leverage technology and better strategies, they can change greater than the consumers can.

In a stakeholder-driven society, the stakeholders need to raise their voices. The investors and those with capital funding are those investors.

Companies can not just lower their carbon. They can totally redesign their business. Green Bonds and funding for these types of projects are at an all-time high. The pair's agreement has put politicians under pressure also, so support is everywhere. It just takes a commitment to innovation. Innovation that helped the planet become as it is today is the opportunity for our generation to build something better than ever existed before.

There is no need to blame or shame companies, just to support them as they make progress.

15Rock's tools and state-of-the-art models are designed to allow them to track their progress for investors and for investors to show their clients how good they are at operating in this new world.

It's never been easier.

15Rock's solution has a free tier. We have fixed pricing or pay as you go. We also have allocated 7 million to help companies who need the support to make environmental impact investing a reality.

This isn't just good for everyone. It's good for our planet. 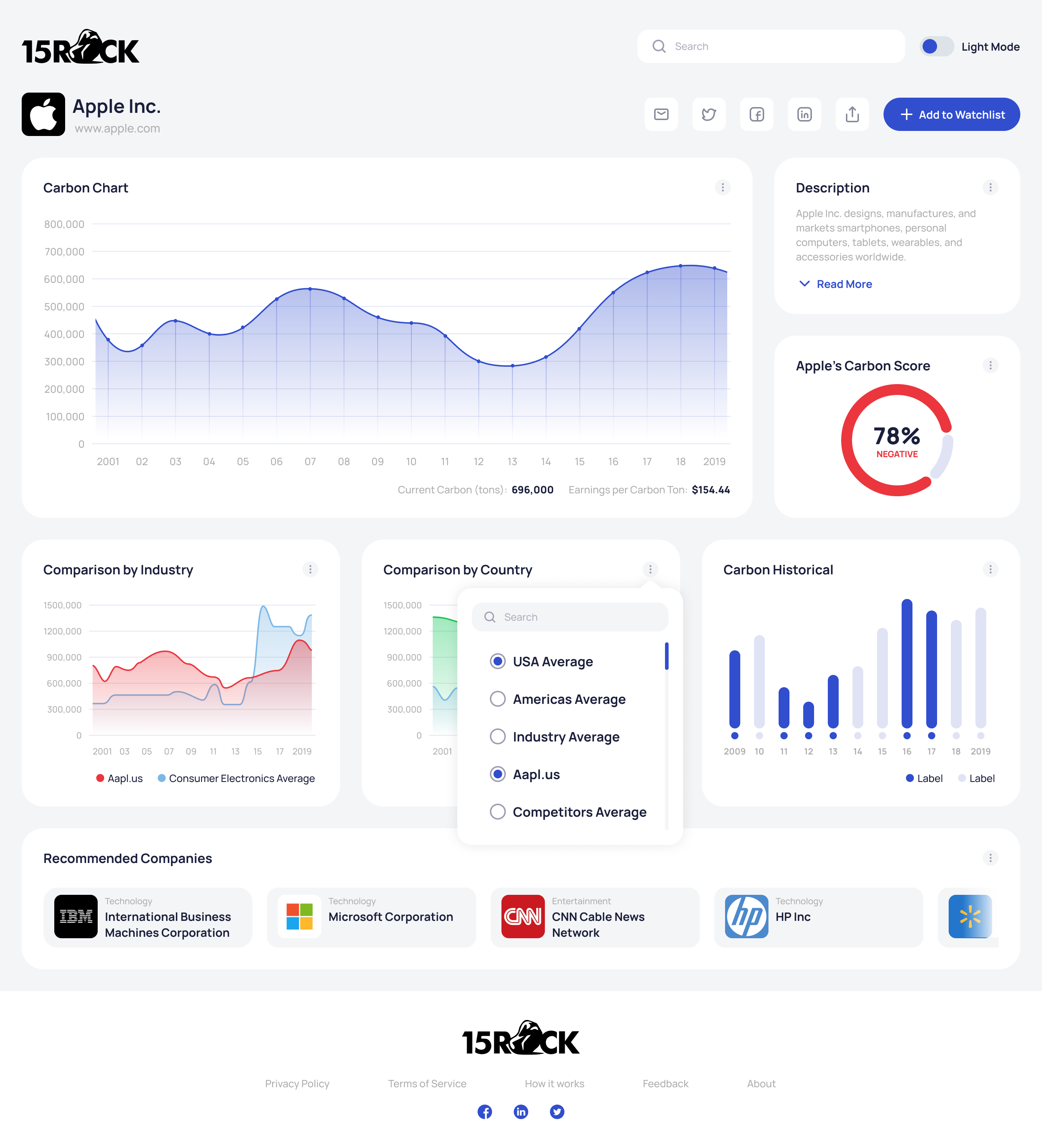 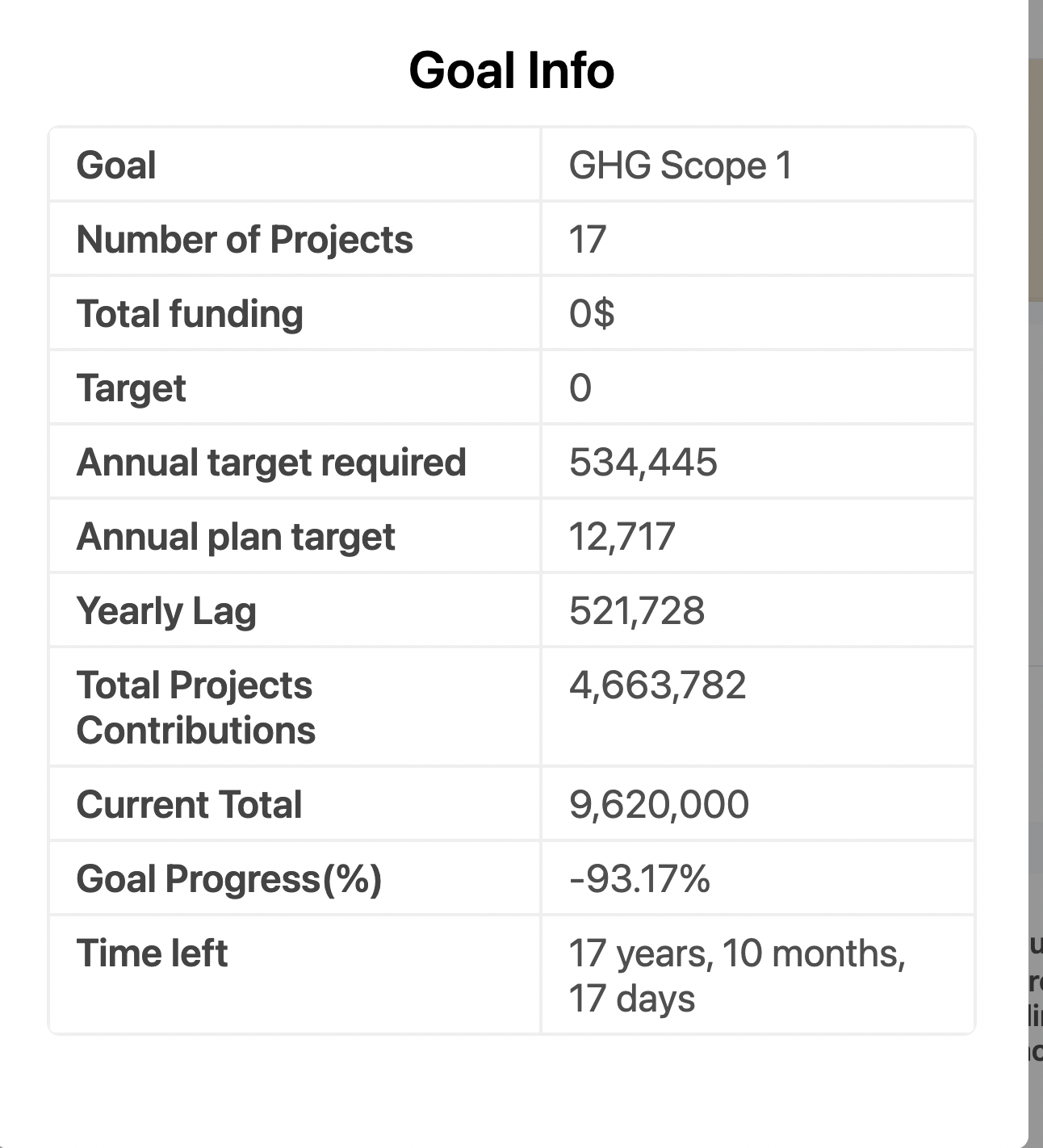 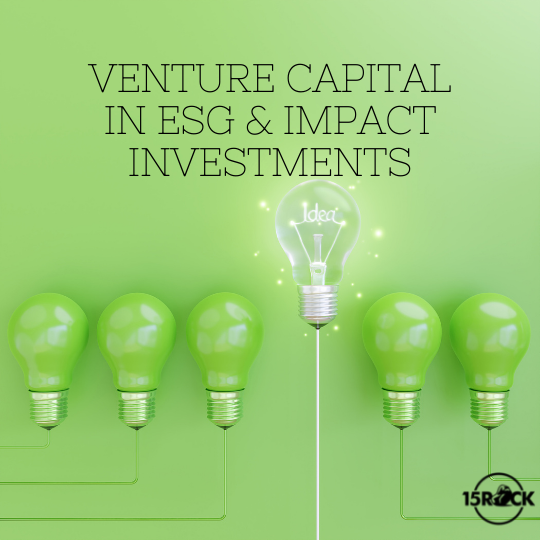 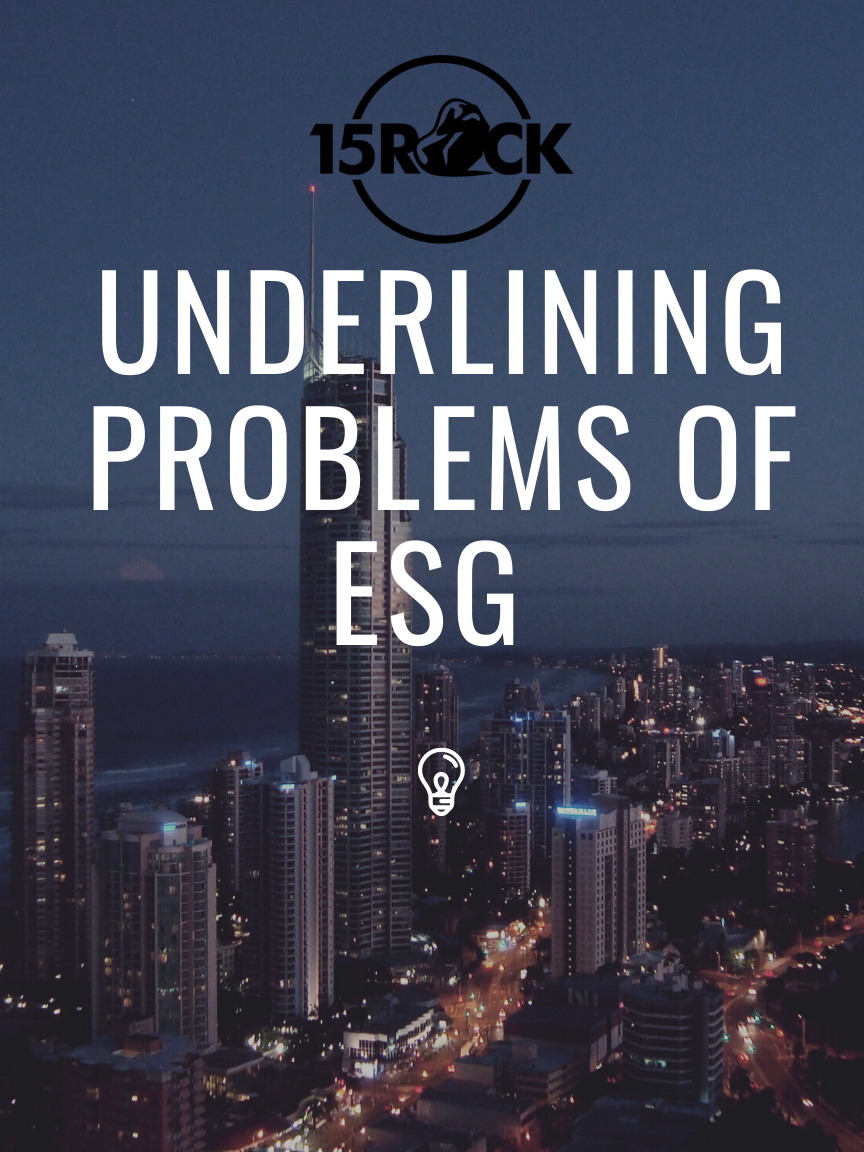 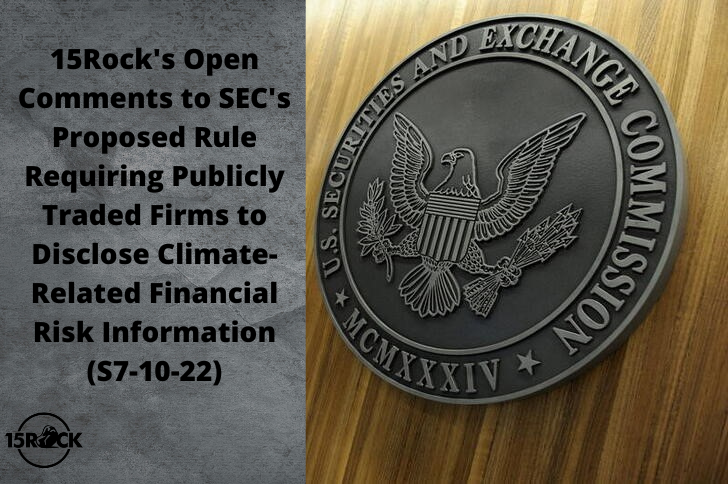